I thought I’d try a different method of glassing the board based on the difficulty and dissatisfaction of ‘painting’ the resin on the last board.  This time I bought some cheap wallboard with the slick coating on one side.  I thought I could lay down some plastic, then fiberglass, wet it out, and then drape the glass on the board.  The small scale test came out pretty rough with some blemishes from the plastic.  A little sanding and a gloss coat might have produced a reasonable finish.

Now, I would have video of glassing the full board except that my daughter decided that the GoPro on a tripod in the garage pointing at a surfboard staging area must have meant I wasn’t using it for anything, so she took it.  I was at the store picking up some thicker plastic that I thought might lessen the defects in the finish.  When I got back, the camera was gone and after tearing the garage apart for an hour looking for where it fell or where I must have put it, I gave up and turned back to glassing the board.  Later she came by to ask where the charger was…the gall 🙂 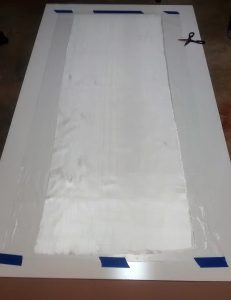 So with the new plastic on hand I put it down with a couple layers of fiberglass on top (see pic).  Then proceeded to wet it out.  The larger scale did not work nearly as well, the resin was pooling beneath the glass and when I tried to squeegee it out, the glass folded over and so I did the best I could without overworking it.  I draped the full sheets over the board and commenced tugging and smoothing, the excess resin began to pool and drip.  It wasn’t long before I had to give up on the whole thing, rip it off and figure out what to do next.

The next attempt was to just forego the plastic and wet out the glass directly on the board, one sheet at a time.  I managed to get the first side laminated, cured in the sun, and trimmed so I could do the top in the same day.  Same process for the top, although you can see the squeegee lines from where I worked it too long.

For the second layer of glass, I’ll use more traditional methods.  Hopefully I can keep track of my camera this time… 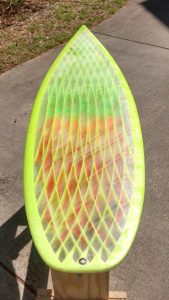 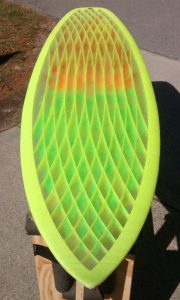 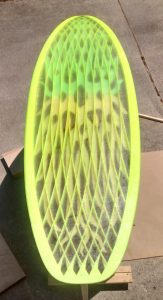 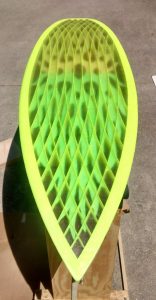