Received some parts from Digi-Key to assemble the motor controller for vertical drive that will move the camera.  The controller is basically a relay that has the two outputs crossed so that when the relay goes from Open to Closed the output polarity is reversed.  Two darlington transistors allow control the direction and turn the motor on/off via the Arduino.  I pulled the info from Instructables.  One thing I didn’t check before I heated up the iron was the schematic for the relay. Apparently mine was a little different and I had to do a little rework to get it right. 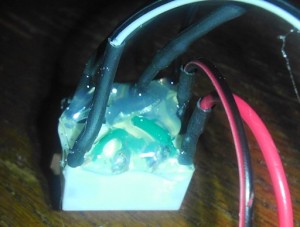 The motor was pulled from a DVD player/VCR combo that says “Loading Motor” on the PCB.  I’ve been running it at around 9V and it is too fast.  I’ll have to implement PWM to get the speed under control.  I tried a 10k ohm variable resistor but that is too touchy to get the right speed.

I have a worm gear printed off and I need to design a mount for the gear, motor, and spool. Looks like I’ll be busy for a few more days on this.